This wiki is being considered for deletion due to inactivity. Please comment on the community portal if you have any objections.

Amnesia: A Machine for Pigs

Amnesia: A Machine for Pigs is the second game in the Amnesia series, it has been released on September 10th, 2013. It has been developed by The Chinese Room and will be published by Frictional Games, Frictional Games also developed and published Amnesia: The Dark Descent (and the expansion Amnesia: Justine).

About the game[edit | edit source] 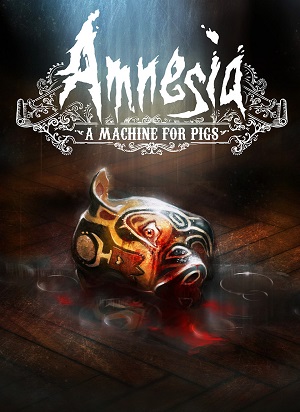 Wealthy industrialist Oswald Mandus awakes in his bed, wracked with fever and haunted by dreams of a dark and hellish engine. Tortured by visions of a disastrous expedition to Mexico, broken on the failing dreams of an industrial utopia, wracked with guilt and tropical disease, he wakes into a nightmare. The house is silent, the ground beneath him shaking at the will of some infernal machine: all he knows is that his children are in grave peril, and it is up to him to save them.

Fresh and new approach to the Amnesia world while staying true to its origins.

The darkest, most horrific tale ever told in a videogame.

The official trailer for Amnesia: A Machine for Pigs.